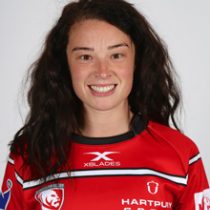 The Hucclecote club in her home city of Gloucester launched the playing career of Kelly Smith, who was introduced to the game there at the age of 10.

She moved on to Worcester Valkyries, where she made her debut against Saracens, before signing for Gloucester-Hartpury for the 2017/18 Tyrrells Premier 15s season. That season saw Kelly complete the second year of her studies in physical education and school sports at Hartpury College.

Kelly previously attended Beaufort Community School and made six appearances for England U20 in 2016, finishing on the losing side only once, against France in March 2017.

She appeared in all three victories over Canada at Trent College that year, can play on the wing or at full back and has represented GB Students Sevens.

She scored her maiden try in her third World Rugby Women's Sevens Series event during the 45-7 win over Argentina the Challenge Trophy semi-final in Las Vegas in March 2017.

Kelly then made her senior breakthrough with England in the 15-a-side game when she was named in the squad for the 2018 Women's Six Nations.

She made her debut off the bench against Scotland before she was given her first start, on the right wing, against Ireland at Coventry's Ricoh Arena in what was the Red Roses' final match of the campaign.

In January 2019 she was one of 28 players awarded a full-time England contract, having started in each of the Red Roses’ winning Quilter Internationals in November 2018, scoring in all three, including twice against USA.

Kelly would score two tries in four games during the 2019 Women’s Six Nations as England won the Grand Slam, and finished top try scorer in the Tyrrells Premier 15s 2018-19 season as she crossed 24 times.