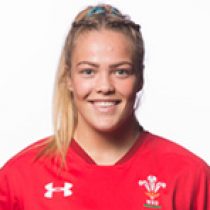 Jones started playing rugby in 2014 with Seven Sisters in the Neath Valleys, where she was the first captain of their youth team. As a member of the senior side, she has been part of a plate-winning team which has reached the league finals on several occasions.

Kelsey won her first cap for Wales as a replacement against New Zealand in the 2017 Women’s Rugby World Cup.

In January 2019, she was named in the Wales squad for the 2019 Six Nations tournament.

She finished the tournament with 15 caps for Wales in all competitions before being called up for the 2020 Six Nations.

Jones has made 6 appearances in the Women's Six Nations.