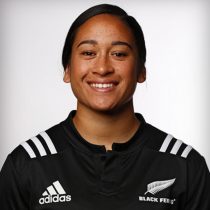 Simon, who plays for Hamilton Old Boys Rugby club, made her Farah Palmer Cup debut for Waikato in 2018 in a 33-27 victory over Counties Manukau.

In her debut season for Waikato, the loose forward, who can play on either side of the scrum, established herself as one of the team's most important players. Simon started in all seven of Waikato's games, including four at blindside flanker and three at openside.

Simon is also an outstanding sevens player and was part of the Auckland side which competed at the 2018 National Sevens tournament in Rotorua.

After a strong performance for Auckland at the national tournament, Simon was selected in the Black Ferns Sevens Development team which toured Japan in February 2019.

Strong form in both the sevens and 15s has seen Simon attract the attention of Black Ferns selectors in 2019 and she will be looking to impress when given an opportunity this season.