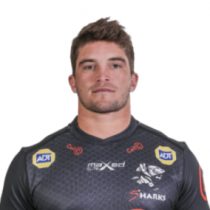 He made his first class debut during the 2016 Currie Cup qualifiers.

In 2017 he was named in the Sharks Currie Cup squad and made his debut against the Cheetahs.

van Vuuren impressed Robert du Preez and his coaching staff during the Currie Cup and earned a spot in the Sharks 2018 Super Rugby squad.