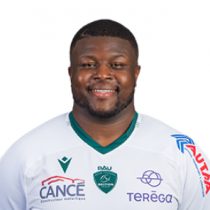 Kevin Yameogo worked his way through the Lyon youth ranks at the club and signed an Academy contract with the side in July 2017.


He was brought into the senior side in December 2018 and was included in the European squad following a number of injuries in the front row.


He made his debut off the bench against Glasgow Warriors in round 3 of the Champions Cup,


Yameogo made a further three appearances for Lyon in the Champions Cup that season and was capped 8 times in the TOP14.