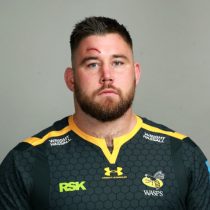 Born in Stoke, Brookes spent time in South Africa and Australia during his youth before settling at Kirkham Grammar School in Lancashire. He played club rugby at Fylde, won a County Championship with Lancashire in 2009.
He started his professional career at Newcastle Falcons that same year.

Brookes made 40 appearances for the Falcons between 2009-2011, but only one stated one of those.
Brookes was capped at Under-19 and Under-20 level by Ireland before making his England Under-20 debut during the 2010 Under 20 Six Nations.
Elevated to the England Saxons squad at the close of the 2010/11 season, he was a member of the Churchill Cup-winning squad.

Brookes moved to the Leicester Tigers in 2011 but was loaned back to the Falcons in 2013. That lead to another two-year contract.
In two separate spells, Brooks made 81 appearances between 2009 and 2015,

In June 2018, the England international prop signed a deal with Wasps from Northampton Saints.
His first season at Wasps saw him make 18 appearances despite an ankle injury keeping him out of action for four months of the campaign

Brookes has played each position in the front row though most of his senior experience has been gained at tight-head. Brookes was named in the 31 man squad for the RWC 2015. He was also part of the 2016 Grand Slam-winning squad.