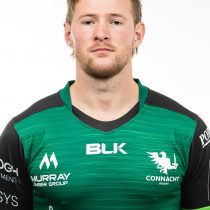 Born in England to Irish parents, Kieran Marmion cut his teeth at Kirkham Grammar School, where he was part of their successful sevens team. A product of the Irish Exiles programme and he made his Irish Under 18’s debut in the FIRA European Championships in France. Kieran’s impressive performances impressed Ireland’s U20 coach Mike Ruddock enough for him to start each of Ireland’s five Junior World Championship games.

In 2011, he joined the Connacht academy from UWIC college in and wasted no time in establishing himself on the Connacht rugby map. He scored crucial tries away to Ulster to seal Connacht’s under 20’s 2011 Interprovincial title and his impressive form alerted Connacht head coach Eric Elwood.

Represented Ireland at U18 and U19 level and U20s in the Junior World Championship in 2011 in Italy and 2012 in South Africa, scoring a try against England. Also appeared in all 5 games of the U20 Six Nations in 2012.

His first two caps came as a replacement on the tour Argentina summer 2014. The halfback shone for his province during the seasons that followed, most notably playing a key role in the Pro12 title last season. His efforts lead to him being included in Ireland's memorable tour to South Africa, where they picked up a victory over the Springboks for the first time in the Republic and he capped off his year with a start in Ireland's match against Canada at the Aviva Stadium.

Marmion played a starring second half in the momentous victory over Australia, with a depleted back-line, the scrum-half was forced to fill in on the wing and put in a memorable performance halting the Wallabies onslaught.

Possessing a distinct natural ability to identify opportunities around the fringes, paired with an excellent kicking and defensive game, Marmion has developed into a quality test scrumhalf over the years. In December 2017 Marmion signed a new deal with the IRFU and Connacht which will see him remain at the club beyond the next Rugby World Cup in 2019.

Marmion was one of the standouts for Ireland in their victory over New Zealand in Dublin in 2018 but was left out of the Rugby World Cup squad, which lead to rumours that he may sign for Toulouse or Saracens.

However, in November 2019, the scrumhalf signed a new three-year deal with the Province he has made over 160 appearances for, keeping him at Connacht up to the end of the 2022/23 season.