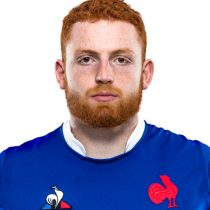 Killian Geraci shot enjoyed a rapid rise to professional rugby shortly after finishing school and was part of France's 'golden generation' of youngsters.

The powerful second-rower broke into the Grenoble squad during the 2017/18 PROD2 season. He was selected in the France u20 Six Nations squad in 2017 as well as the U20 World Championship.

The red-headed second-rower, impressed during his three seasons with the u20s as well as with Grenoble which caught the eye of Lyon who snapped up the signature of the lock who was producing on his promise.

He joins Lyon ahead of the 2019/20 season, having already accumulated 15 appearances in the Top 14 with Grenoble and featured heavily for the side in their fight for promotion during the 2017/18.

His early-season form with Lyon earned the young uncapped second-rower a call up to the France squad for the 2020 Six Nations.