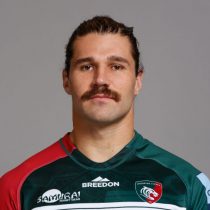 He was included in the Western Province squad participating in the 2013 Vodacom Cup and made his first class debut as a substitute in their match against the Border Bulldogs in Paarl.

Kobus van Wyk was part of the highly successful South African U20 team that won the IRB Junior World Championship in 2012 and is comfortable playing at both centre and wing. He has represented Western Province at Under 18, 19 and 21 levels before making his Super Rugby debut in 2014 despite having not made an appearance at Currie Cup level. After an injury hit year in 2015 he returned to fitness and the Stormers squad for the 2016 Super Rugby season.

Van Wyk made 40 appearances for the Stormers in Super Rugby before joining the Sharks ahead of the 2017 Super Rugby season.

He was a regular in the Sharks side during his first season as he featured in 13 of the Sharks 16 matches scoring 7 tries.

He made eight appearances for the Hurricanes in 2020 scoring eight tries before signing for Premiership club Leicester Tigers.