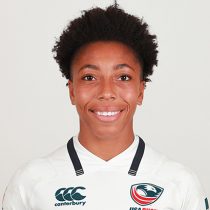 Thomas ran track and played basketball in high school in Philadelphia and was All-Catholic in hurdles, high jump and long jump.

She began playing rugby her freshman year at University of Central Florida and was selected to the Women's Collegiate All-Americans' tours in 2013 and 2014 in France and Canada, respectively.

Thomas made her World Rugby Women's Sevens Series debut at São Paulo Sevens in February 2015, continuing to make appearances on the sevens scene before earning her first 15s cap two years later at the 2017 CanAm Series. That same year, she suited up for the 2017 Women's Rugby World Cup where the Eagles soared to a fourth place finish.


Thomas has racked up 21 appearances at World Sevens Series events and enters the Women's Rugby Super Series with 21 test caps.