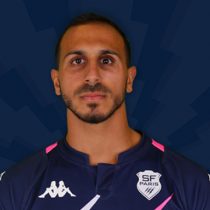 Hamdaoui is Clermont Academy graduate that was called into the French under-20 side in 2013 and helped his side to a 6 Six Nations victory that included a Grand Slam win.

He made his Biarittz debut in 2015 and has been a regular in the squad since.

Stade Francais signed the impressive back ahead of the 2018/19 season.

He scored 7 tries in 17 games for Stade Francais in his first season in Paris and was even more impressive at the start of the 2019/20 season scoring 6 tries in the opening 12 games of the season and earned a call up to the France Six Nations squad ahead as one of 19 uncapped players in Fabien Galthie's 2020 squad.

In September 2020, he signed a new undisclosed deal with Stade Francais.