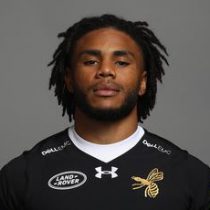 Hailing from Oldham, Manchester, Eastmond was born in July of 1989 and attended the Radclyffe School. His rugby career began in the league format of the game where he represented St.Helens and England.

After four years in the league format of the game, Eastmond moved to Union and took up a contract with Bath.

In early 2013, Eastmond was selected for the England Saxons side before going on to represent the full national team later that summer on their tour of Argentina.

The skillful centre was also selected to go to New Zealand with the Elite squad, where he started the 1st & 3rd test against the All Blacks. Eastmond has made 67 appearances for Bath as well as 6 caps for England. Eastmond has been named in the English squad for the upcoming Six Nations in 2015.

Upon parting ways with former club Bath in 2016 Eastmond penned a contract with Wasps before leaving after two seasons.

In August 2018, Eastmond signed a deal with Leicester Tigers.

After 36 appearances for the Tigers, Eastmond was released from his contract at the club in July 2020 following his refusal to take a 25% pay cut to reflect the impact of the coronavirus pandemic.

In March 2021, Eastmond confirmed his return to rugby league signing with the Leeds Rhinos on a two-year deal.

After two appearances for the league side, he announced his retirement from playing professional rugby.