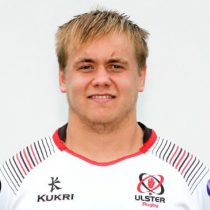 The highly-mobile and technically-proficient loose-head prop is another product of Lisburns’s Wallace High School, and he was carefully brought through the Ulster and Ireland Schools system before joining the Hughes Insurance Ulster Rugby Academy.

He made his senior Ulster debut in a pre-season friendly against Leinster in 2013, but stormed to the fore with a series of outstanding displays in Europe and in the PRO12 during the 2015/16 campaign. McCall’s all-round footballing skills are being carefully developed to ensure he fulfils his massive front-row potential.

McCall has become a permanent member of the Ulster front-row and made his 40th appearance for the province in October 2017.

McCall’s all-round footballing skills are being carefully developed to ensure he fulfils his massive front-row potential.

As a result Ulster have opted to ease the prop forward into play, making regular appearances of the bench.