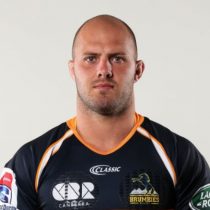 A member of the McCaffrey of the Australian under 20 team that competed in the 2010 Junior World Championship, Lachlan McCaffrey has become renowned for being a hard working and versatile back rower.

The Saint Ignatius' College graduate, who hails from Sydney, kicked off his professional career in 2010 with the Waratahs. The stiff competition for starting roles in the back row prevented him from breaking into the side which prompted a move to the Western Force in 2012

Having made his debut against the Cheetahs in 2010, McCaffrey earned more recognition at the Force and after just seven appearances for the side he caught the interest of the Brumbies who he joined ahead of the 2014 Super Rugby season.

His time with the Brumbies was short-lived as he spent just one season at the side making 7 appearances before signing for English side London Welsh where he spent the 2014/15 season before his form caught the eye of Leicester Tigers.

A successful stint with the club saw him become an integral part of the pack making 47 appearances before he left the club ahead of the 2017/18 season.

Upon leaving the side, McCaffrey returned to the Brumbies ahead of the 2018 Super Rugby season and entered the 2018 season having previously made 16 appearances in the competition.

Ever since returning to the Brumbies for the 2018 season, Lachlan McCaffrey has become a fan favourite at the club with 2019 being arguably his career-best year.

He made 24 appearances for the Brumbies in his first two seasons back at the club taking his Super Rugby cap tally to 40 ahead of the 2020 season.