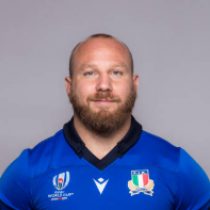 Has played in three Rugby World Cups with Italy, 2007, 2011, and captaining them for the first two pool games at RWC 2015 until injury took him out of the tournament against Canada, the game when he became Italy's most capped hooker.

Played in nine successive RBS 6 Nations campaigns following his debut against Ireland in Rome in 2007, missing only two possible matches up to the end of the 2015 tournament.

Scored his maiden RBS 6 Nations try against Scotland in his only appearance in the Championship last season to add to his 4 touch downs in his first 46 games against Argentina, Pacific Islanders, Japan and Tonga.

Joined Toulouse from Leicester in the summer making his Top-14 debut against Montpellier in August and has added on further cap this season, in the autumn internationals against New Zealand

The experienced hooker took his test cap tally 104 before he suffered an ACL injury in Italy's final Six Nations match of the season ruling him out of the remainder of his season with Toulouse and ultimately his World Cup hopes.


In August 2019, Ghiraldini overcame his knee injury and was included in Conor O'shea's 31-man squad for the 2019 Rugby World Cup.