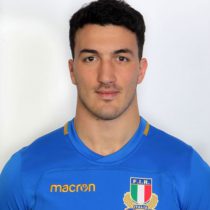 A big and physical winger, Leonardo has burst on to the scene since first appearing in 2012. Playing for Zebre in 2012, Sarto had an accomplished underage career with Italy before joining the senior ranks in 2013.

His full debut came against Scotland in 2014, scoring a try on debut. He starred for Italy in the 2014 Six Nations, leading to him being selected for the 2015 Rugby World Cup.

In the summer of 2016, Leonardo signed for Glasgow Warriors, making his debut for the club in the pre-season match against Harlequins on the 20 August 2016.

Sarto played for Zebre in the 2015/16 season before moving to Glasgow and scored nine tries in 18 appearances for the Scots including two in their Champions Cup win over Tigers at Scotstoun in October 2016.

He gained his first international call-up with Italy in 2013.

In December 2018, he signed as injury cover for the Leicester Tigers and following that joined Benetton Rugby to play Pro 14 ahead of the 2019/20 season

Ahead of the 2019 RWC Sarto had played 34 times for his country over 3 Six Nations tournaments and one World Cup.

As of December 2019, he has made 2 appearances and has scored 5 points for Benetton.