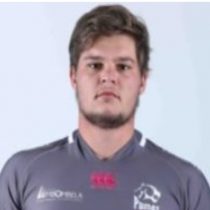 Le Roux Roets is described as one of the gentle giants of the game. In his short representative career, Roets has already rubbed shoulders with All Blacks star Dan Carter and Springboks first-five Johan Goosen when he was recruited by French Club Racing for the 2016/2017 academy season.

In South Africa, he played age grade rugby and in the domestic Currie Cup competition for the Lions, Bulls and Pumas.

January 2020 saw him being named in the Sharks squad for the 2020 Super Rugby.