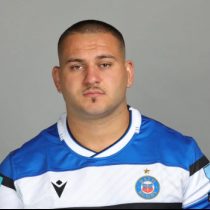 Lewis was born in Middlesbrough and schooled at Prince Henry's Grammar School in Otley, West Yorkshire.

A former England U18/20 international and Leeds Academy graduate, Boyce enjoyed success at age-group level including the 2016 Junior World Cup victory in Manchester.

After making 30 appearances for the Greene King IPA Championship side Yorkshire Carnegie, Boyce made the switch to the top-flight of English domestic rugby.

Boyce signed for Harlequins for the 2017-18 Aviva Premiership season.

The front-rower quickly established himself as one of the most exciting loosehead props in the country, and was rewarded with a place in Eddie Jones’ 35-man squad for England’s Six Nations campaign in 2018.

Boyce was a standout for the Quins during the 2018/19 season making 13 appearances in the Premiership, after making 9 the season before and went into the 2019 season looking to add to his 6 Champions Cup.