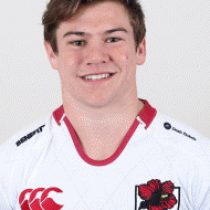 A speedy and slick halfback, Lewis Gjaltema made his first steps into professional rugby when he was added to the North Harbour squad ahead of the 2017 Mitre 10 Cup season.

After finishing school, Gjaltema played for East Coast Bays and in 2018 was voted North Harbour’s Premier Club Player Of The Year, he would later go on to captain the eam.

A regular performer for North Harbour, Gjaltema made the move North in November 2020 signing a deal with Premiership club Harlequins ahead of their 2020/21 season.