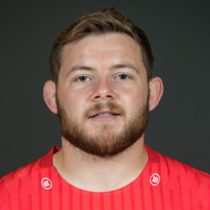 Taking up rugby at the age of 8 with Dolphin RFC, the talented and versatile young sportsman also excelled at GAA, playing initially with Delaneys before moving to St Nicks, where, at just 16-years-old and as their goalkeeper, he took part in the Cork Senior Football Championship.

Continuing with rugby while attending Christian Brothers College, Cork, it was his exploits in the Schools game that put him on the radar of provincial and international age-grade rugby. Representing Munster U18 Schools, ‘Boomer’, as he’s affectionately known by his peers, also lined out for both province and country at U19 and U20.

Focusing solely on rugby since joining the Munster sub-academy ranks in the summer of 2014, O’Connor is appreciative of his GAA skillset in the looser elements of the game, and this coupled with solid set-piece play has seen the young loosehead make immediate inroads in the professional game.

The Cork-man received a late call up to World Rugby U20 Championship in June 2016 and he made his first senior matchday squad as Munster welcomed reigning French Top 14 champions Stade Francais to Thomond Park for Round 5 of the European Champions Cup.

He played through all the age-grades with Munster from U18, U19 and U20, having also represented the Ireland U19s and won his first Ireland U20 cap in June 2014 at the World Rugby U20s Championship in Italy. He also played six times for Munster A in their 2016/17 B&I Cup title winning campaign, also helping Cork Con to triple success that season - AIL, Munster Senior Cup and Bateman Cup.

O'Connor made his breakthrough at the start of the 2017/18 campaign, with 11 appearances in the first 12 games of the season. Sustained a long-term knee injury against Ospreys in December 2017. He signed a two-year senior contract ahead of the 2018/19 season and returned to action away to Dragons in January 2019 and went on to make seven further appearances that season.

Another contract extension followed in January 2020, a deal that will see O'Connor remain with the province until at least June 2022. As of June 2020, he has 26 Munster caps to his name.