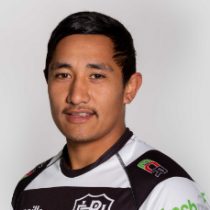 A New Zealand Secondary Schools representative in 2016, McClutchie was outstanding for the Hawke's Bay under-19s as they finished their national tournament in Taupo with a 40-13 win against Taranaki in the play-off for seventh in 2018.

The following season, he was promoted to the senior team where he made his debut as injury cover.

In November 2019, he signed a six-month contract with the NTT Docomo Red Hurricanes in the Japanese Top League.

He went on to make three appearances for the club before the season was cut short due to the pandemic.

McClutchie returned to the Magpies and notched up 38 games in the black and white hoops since his debut in 2018.

In October 2021, he signed a deal with new Super Rugby side, Moana Pasifika.