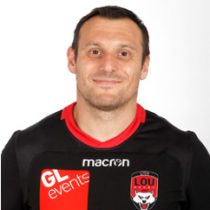 A fan favourite worldwide, Lionel Beauxis has accumulated somewhat of a cult following throughout his career.

An eccentric flyhalf, Beauxis started his senior career with Pau back in 2002 and caught the eye with his exciting skillset and unorthodox style of play.

He played just 29 times for the Club before his departure in 2006 but did manage to rack up 325 points at an average of more than 10 points per game.

He made the move to Stade Francais in 2006 where he battled with Juan Martin Hernandez for a starting role with the pair combining on multiple occasions to great effect.

In his first season with the Club, he guided the side to a Top 14 title beating Clermont 23-18 in the final.

His performances with Stade Francais earned him a test call up and made his debut off the bench replacing David Skrela against Italy.

He earned a place in France's 2007 Rugby World Cup squad and during the tournament he made six appearances, first as a replacement against Namibia and Ireland before securing a starting slot against Georgia, a game in which scored his first international try.

Beauxis retained the jersey for France's famous win over New Zealand at the Millennium Stadium in the quarter-final and also started as Les Bleus were knocked out of the tournament in the semi-final by England. He made a further replacement appearance as France were humbled 34-10 by Argentina in the third-place playoff.

Beauxis missed the entire international season in 2008 due to a nagging back injury, ruling him out of both the Six Nations and autumn internationals. In January 2009 he was named as the sole recognised fly-half in Marc Lievremont's French squad for the 2009 Six Nations.

The fly-half was turning out for Stade Francais at this stage but endured a three-year absence from the national side while Marc Lievremont was at the helm. But come the 2012 Six Nations - with Beauxis switching from Stade Francais to Toulouse and Philippe Saint-Andre in charge of Les Bleus - Beauxis was back in the international reckoning. He played a role in all five of their matches and started both of their last two games.

He made the move to Toulouse in 2011 where he repeated the feat of winning the Top 14 title with the side in his debut season with his new employers.

He helped Bordeaux secure Champions Cup status in his debut season and went on to play 54 games for the club scoring 295 before departing at the end of the 2016/17 season to join Lyon.

After two seasons and 19 appearances for Oyonnax, Beauxis joined his final Club signing for Beziers ahead of the 2021/22.

He played 11 matches for the side and played his final game of his career in the final round of the competition.

Beauxis retired at the end of the 2021/22 season bringing an end to a career spanning 20 years and over 340 first class appearances.

He also represented France 24 times, including 12 starts, and 128 points.