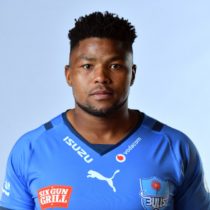 Due to his school not playing rugby, Gqoboka concentrated on athletics and soccer and only started playing rugby at 19 when he moved to Durban and joined Durban Collegians Sports Club.

In 2012, he earned a senior contract with the Eastern Province Kings and was included in their 2012 Vodacom Cup squad.

He was initially named in the Kings Super Rugby training squad for the 2013 Super Rugby season but was later released.

With the Eastern Province Kings promoted to the 2014 Currie Cup Premier Division, Gqoboka made his first appearance in the Premier Division of this competition in August 2014 when he was named in their run-on side for their opening match of the season against Western Province.

Gqoboka was included as one of eight uncapped players in the Springbok squad ahead of the June internationals against France.

The powerful front-rower hadn't made his test debut despite showing some impressive form for the Bulls since his debut against the Stormers in 2016.

Gqoboka took his Super Rugby cap tally to 53 Super Rugby caps as the Bulls made their way to the semi-finals of the competition and forced his way into the 2019 Springbok Rugby Championship squad.

He went into the competition looking to make his test debut having been involved with the squad before.

As of June 2020, Gqoboka has made 59 Super Rugby appearances and has scored 20 points.