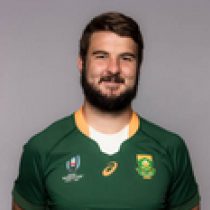 De Jager played at youth level for the Leopards and also played for Potchefstroom-based university side NWU-Pukke. In 2012, he was included in the Leopards' Currie Cup squad, but failed to make an appearance. However, his performances in the 2012 Under-21 Currie Cup earned him a move to the Free State Cheetahs and he was included in the Cheetahs final squad for the 2013 Super Rugby season.

After a number of consistent performances in 2014, he was awarded a Springbok cap, but was plagued with a number of injuries which has halted his progress with the national side. In 2015, Lood was included in the Springboks Rugby Championship squad and has been influential at the lineouts as well as in defence where he consistently shows off his superior physicality.

At the end of the 2016 season, Lood signed for the Bulls with whom he racked up 22 caps.

The hard-working second rower's 2018 season was cut to just 10 appearances due to injury.

April 2019 saw him sign a three-year deal with Sale Sharks, with him expected to arrive in Manchester ahead of the 19/20 Premiership season or, if selected, after the 2019 Rugby World Cup.