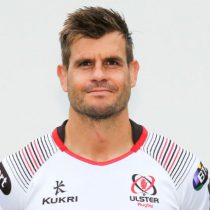 The dependable fullback has battled injury since moving to the Sharks from the Lions, but showed his value in 2012 with an extremely consistent season.

Rock solid under the high ball, with a turn of pace that makes him dangerous on the counter-attack he is also one of the most committed backline players around.

Ludik joined Ulster from French side Agen in 2014. The versatile backline star signed a one-year extension earlier in 2016 and qualified to play for Ireland in the summer of 2017.

He enjoyed a fine start to the 2016/17 season and was rewarded for his superb form with the Kingspan Player of the Month accolade for September, before singing a new contract extension with Ulster in October 2016.

Ludik combines a solid defence with a keen instinct for attack, and his versatility across the three-quarter line has offered Ulster alternative options.

He had been a regular starter for the men in white in the 2019/2020 Pro 14 season prior to the season being brought to a halt.