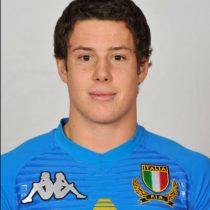 Morisi is another player who returned to Treviso after being there as a player and has impressed with physical skills and ability to adapt to the new level of play.

He played with the jersey of the Greater Milan in Serie A and grew within the Milan set-up. From there he transitioned to the Crusaders Parma.

After being selected for the Italian RWC squad in 2015 he suffered knee ligament damage in a warm-up game that ruled him out of the tournament all together.

In April 2017, Morisi extended his stay at Benetton Treviso for the 2017/18 season and beyond.

Morisi was named for the 2019 Six Nations squad having had 6 previous Six Nations appearances.

As of December 2019, he has made 53 appearances for Treviso and has scored 25 points.