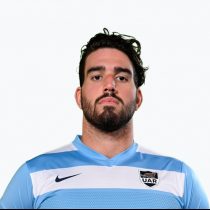 Argentine-born but raised in Spain, Lucas Paulos is a tall and athletic second-rower.

He began his career at Stade Montois' Academy, where he spent 2 seasons before returning to Argentina.

Paulos went on to represent Argentina at u20 level in two World Championships and played Super Rugby for the Jaguares in 2019 and 2020.

He played 12 times for the Jaguares and went on to make his test debut for Argentina against New Zealand in November 2020. He made one other appearance for the test side against Australia before signing as a medical joker for TOP14 side Brive.