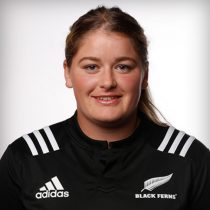 Connor, who plays her rugby for Waikite in the Baywide Premier Women's Club Rugby competition, has enjoyed a unique first-class rugby career to date.

Starting her debut season as a loose forward, Connor played all eight of Bay of Plenty’s games in the 2014 season, starting six as Number 8 and two as blindside flanker.

After an impressive debut season in 2014, Connor was selected in a squad of 45 players for a Black Ferns trial ahead of the Women’s Rugby Super Series in Canada.

In the 2015 season, Connor again played at Number 8, starting five games. However, in the 2016 season she made a switch to the front row and started five games at loosehead prop.

As a converted front rower, Connor enjoyed her most consistent season in 2017 and played all seven of Bay of Plenty’s games at loosehead.

Now fully recovered, Connor can be considered an experienced first-class rugby player, having played 25 Farah Palmer Cup games for Bay of Plenty.
Positional changes have continued for Connor and the versatile forward will now see her switch front row positions to hooker for the 2019 season.

Consistent performances for Bay of Plenty has seen the hooker selected as one of 29 players to be offered a Black Fern contract in 2019.