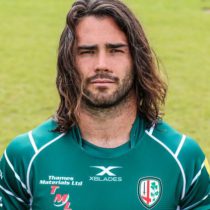 Luke McLean came to Benetton Rugby for the 2009/2010 season. Coming from Calvisano, plays mostly fullback, but can adapt to multiple roles in the backline. Previously, he played with the Souths in Brisbane and Perth. Offensive player with a good boot, was National Australian youth, participating in the Under-19 World Cup in 2006 in Dubai.

Has won two Italian Championship finals: with Calvisano 2008 and Treviso 2010. PRO12 debut came in the first round of the 2010/11 season for Treviso at home to Scarlets in the Italian side's first ever game in the tournament.

Played in all Italy's pool games at RWC2011 and started all four games in RWC2015 at full-back. Wore the No.15 shirt for two tests last summer in Argentina and USA but switched to inside centre for all three autumn internationals.

Made his RBS 6 Nations debut against England at Twickenham in 2009, since then has missed out on selection for the matchday squad twice - against Scotland in 2012 and 2016, and named man of the match against the same opponent in round 3, 2015

Having moved to Italy after his underage career ended, McLean was picked up the Italian national set up, making his debut in 2008 against South Africa in Cape Town. Since then he has amassed over 70 caps for Italy, and added to that at the 2015 Rugby World Cup.

His three RBS 6 Nations tries to date came against Wales in Cardiff in 2010, Ireland in Rome in 2011, and England at Twickenham in 2013. Scored 7 tries in his first 51 test caps, but has added none since.

The elusive back player was also included in the Italy squad for the 2017 Six Nations tournament, where he will want to add to his 20 caps and 1 try, in Six Nations.

The versatile back, 29, who has Premiership experience and 89 Italy caps to his name, played in all of his country’s RBS 6 Nations matches this year.

Launching his playing career at Perth Spirit in 2007, Australian-born McLean made the switch to Italian side Calvisano the same year where he spent two seasons prior to his move to Pro12 side Treviso.

McLean enjoyed five seasons with Treviso during which time his international career went from strength to strength and in 2014 Sale Sharks came calling for his services.

The fleet-footed back who can play at either full-back, wing or centre returned to Treviso in 2015.