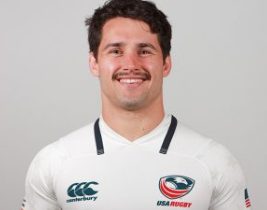 Hughes was born in England but represents the USA in Sevens Rugby. Plays as a fullback for the States and after making his debut in 2014 in Wellington he has become an integral part of the US squad,

With 5 tries in his first 2 events the young man became a regular starter in the side with the fullback also taking the kicks.

He went on to captain the USA 7s team to a sixth place finish in the 2015/2016 season, becoming the highest points scorer in the world for the year.

In May 2017, Hughes was named in the USA Men's Eagles squad for the Emirates Airline Summer Series and Rugby World Cup 2019 Qualifiers this June and July, having won two caps.