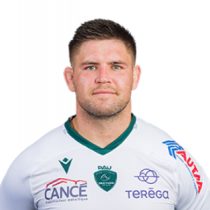 A product of the famous Paarl Boys’ High School in South Africa and a IRB Junior World Championship winner with the South African U20 side in 2012.

A journeyman, van Dyk has experience playing for Pro14 champions Leinster, the Barbarians as well as the Natal Sharks, Griquas and Cheetahs in South Africa.

Van Dyk played a key role for Toulouse during their run to the TOP14 title during the 2018/19, the club's 20th, while also helping the side to the playoffs of the Champions Cup.

After departing Toulouse, van Dyk took up a short-term deal at Harlequins before signing a one-year deal with an option of a second year with Exeter Chiefs.

Van Dyk has provided cover for Worcester Warriors and Harlequins during the 2020/21 season before joining Pau to again provide cover for injuries.