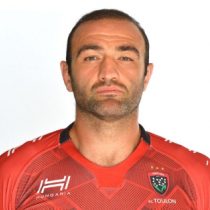 The big loose forward/lock has created a bit of a cult following from his times in French Rugby. Starting off at Montpellier and now plying his trade at Toulon the Georgian is an integral part of the national team set up too. He will captain his side in the 2015 World Cup and will no doubt make a bigger name for himself.

Gorgodze made history during the 2015 Rugby World Cup as Georgia won two matches - against Tonga and Namibia.

Following the World Cup Gorgodze has continued to build a stellar reputation in France, delivering fantastic performances each time he stepped onto the field.

On 4 May 2017, Gorgodze announced his retirement from international rugby, the Georgian captain won 71 Test caps since making his debut back in 2003 against Spain.

Gorgodze, who plays for Toulon in France, featured in three Rugby World Cups and scored 26 international tries for Georgia.

Georgia’s all-time highest try scorer Mamuka Gorgodze retired from international rugby in 2016 but, following injuries in the Georgian squad ahead of the 2019 Rugby World Cup, he came out of retirement and was named in the squad to travel to Japan.