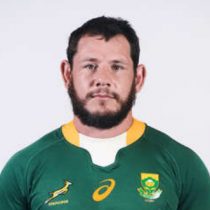 Coetzee enrolled himself in the Sharks academy after school and from there his career has exploded.

After making his Currie Cup debut in 2011, he starred for the Sharks in Super Rugby in 2012 and was handed his Test debut, starting every Test match against England in June. He gets through an incredible amount of work on defense and regularly leads the tackle count, but also carries the ball up effectively which means he can play any position in the back row.

One of the game’s most energetic players, his work rate often sees him top the tackle statistics and his reward for combining outstanding defense with the ability to get over the gain line on attack saw him entrenched as a first choice at The Sharks as well as an important member of the Springbok set-up, where he has managed to showcase his talents with excellent performances.

After a great set of performances in the 2015 season, Coetzee announced that he would join Irish Pro12 side Ulster on a three-year deal starting in the 2016–17 season.

In April 2016 playing Super Rugby, Coetzee suffered a knee injury that ruled him out for 9 months. The 28-times capped Springbok returned to bolster the Ulster back row and has looked very impressive to date.

An imposing ball-carrying breakaway forward, famed for his off-loading ability, Coetzee joined Ulster on a three-year deal at the start of the 2016-17 season after a short spell in Japan and had been a long-term target of the Ulster coaching team.

His superb form in the 2018-19 season earned him a three-year contract extension, keeping him at the club until at least the summer of 2022.

As of May 2020, he has made 41 appearances for the Irish province and has scored 30 points.

In December 2020, he was released from his final year of his contract at Ulster to join the Bulls.