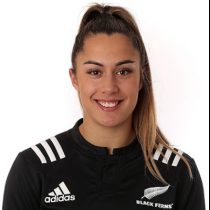 As at Wellington East Girls’ College, Marcelle Parkes’ radar was nowhere near rugby
.
An accomplished softballer, on the verge of the Junior White Sox, and netballer, as predominantly a wing defence, she decided to play sevens for the Marist St Pat’s club to keep fit in the netball off-season.

By 2018 she was in the Wellington Sevens team to play at the national tournament, where she turned the right heads.

Playing in the midfield for Marist St Pats in the 15s game in Wellington club rugby.

Her versatility saw her named in the loose forwards for the Black Ferns Laurie O'Reilly Memorial Trophy 2018 before she made her Test debut against France on the Northern Tour in 2018.