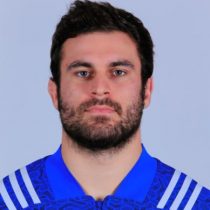 Marco began his career with Bourgoin in 2012, spending one season with the French second-tier club.

In 2013, he joined Bordeaux in the TOP14 and has appeared over 60 times for the club in the back row.

He played on 28 occasions during the 2016-17 season, scoring one try for his efforts.

The 24-year-old was picked for the French XV side to face All Blacks in November 2017.

Marco was named in the 2018 French Six Nations squad.

In July 2021, Tauleigne signed a three-season deal with Montpellier.