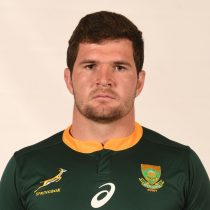 A hooker turned loose forward Marco van Staden represented the Limpopo Blue Bulls U19 after school and caught the eye of the Blue Bulls coaching side and was included in their squad for the 2015 Vodacom Cup.

He represented the union at the U21 Currie Cup and attended the University of Pretoria the following year.

In 2016 he was part of a powerful Tuks side in the Varsity Cup, his second year in the competition he helped the side to title.

His performances for Tuks earned him a spot in the Blue Bulls 2017 Currie Cup, where he impressed the new Bulls head coach John Mitchell who included him in the Bulls 2018 Super Rugby squad.

He made his Super Rugby debut off the bench in the opening round against the Hurricanes and signed a new deal to remain with the Bulls until 2019.

Van Staden was one of the standout flankers during the 2018 Super Rugby season and was rumoured to be included in the Springboks squad for the June Tests against England but injury delayed his call-up.

The young openside flanker featured in all 16 of the Bulls matches in his debut Super Rugby season and was one of three uncapped players included in Springboks squad for the 2018 Rugby Championship.

In March 2021, it was announced that van Staden would be leaving the Bulls to join up with Leicester Tigers ahead of the 2021-22 season.