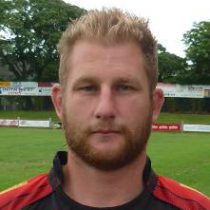 A number eight, he has represented Nelson Bays, Tasman and Cornwall at a provincial or county level and was a member of the England Sevens team at the 2014 Commonwealth Games in Glasgow. Bright played for and captained London Scottish from 2011 until his departure for Ealing Trailfinders ahead of the 2016/17 season.

In May 2017, the then Ealing Trailfinders' Bright was named The Rugby Professional Association's Greene King IPA Championship Player of the Year for 2016-17.

It was the first time that the number 8 had won the award having been twice nominated during his time at London Scottish.

The New Zealander was announced as Ealing's Captain for the 2017/18 season, ahead of his second season with the club.

Bright returned to London Scottish in 2018 after leaving the club for two seasons and was named as the captain for the 2018-19 Championship season.

In June 2020, the stalwart signed a new deal to remain with the Exiles having made over 200+ appearances in the Greene King IPA Championship and Championship combined.