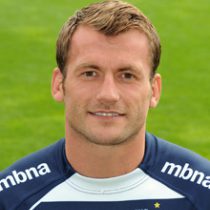 Born in the Cumbria region of England, Cueto graduated from St.Thomas More School before attending Manchester Metropolitan University. A pacey winger who can also operate at fullback, Cueto made his professional debut for Sale Sharks in 2001 and has remained at the club ever since. Having represented England at sevens level, Cueto went on to make his debut for the full national side in 2004 and went on to earn over 50 caps. Cueto also represented the British and Irish Lions on their 2005 tour to New Zealand.