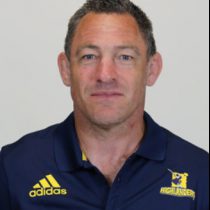 Hammett has a wealth of experience having been involved with the Canterbury/Crusaders since 2006, beginning as a forward coach and stepping up to the assistant coach role for the Crusaders and maintaining that role until 2010.

Hammett then moved up the country to the Hurricanes where he was the Head Coach there from 2011 - 2014.

After leaving the Hurricanes, Hammett went on to a Director of Rugby Role at the Cardiff Blues for 2014 and 2015 before becoming the inaugural coach of the Japanese Super Rugby expansion team, the Sunwolves, in 2016.

Returning back to New Zealand for the 2016 Mitre Ten Cup Season Hammett helped to lead the Tasman Makos back to the Premiership final.

Mark Hammett joined the Highlanders for the first time in 2017, coming in to command the forwards following the departure of Jamie Joseph and will enter his fourth season with the Highlanders in 2020.