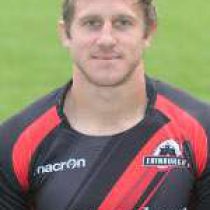 Mark scored on his debut when he joined the Border Reivers on an amateur contract in 2006.

With his father, Keith Robertson, having 44 caps for Scotland, Mark went on to sign for Scotland Sevens, and was at the time the side's highest try scorer with 17.

Mark joined the Glasgow Warriors from Scotland 7s and provided cover during the Rugby World Cup in 2015.

He was selected to represent Britain in the 2016 Summer Olympics.