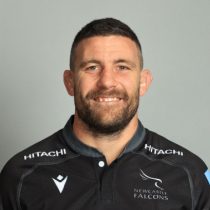 Back-row Wilson joined the Falcons full-time in the summer of 2010. A former student at Northumbria University, Cumbrian Wilson played his first rugby for local club Kendal, before making the move across the Pennines.

A captain of England Students in the 2009-10 season, Wilson made three appearances for the Falcons that season in the LV= Cup, having been loaned from Blaydon.

After a fantastic first full season at Kingston Park in which he made 29 appearances, the South Cumbrian won the Academy Player of the Season award.

In July 2016, Wilson signed a four-year deal with Newcastle Falcons, committing to the side until the 2019-20 season.

The following year, he was invited to a training camp with the senior England squad by Eddie Jones and made his debut in the 1st summer test against Argentina.

After 221 appearances for the Falcons, the England international back-rower pledged his long-term future with the Kingston Park club by signing a new four-year deal but following their relegation to the Championship he was sent to Sale Sharks on loan to further enhance his England aspirations.

On 11 August 2019, Wilson was selected by Eddie Jones as one of five back-row forwards for the 2019 Rugby World Cup.

2020 saw him being named in England's Six Nations squad.

Following 224 appearances and 41 tries scored for the Falcons, Wilson was named as the side's captain, succeeding co-captains George McGuigan and Michael Young.

In February 2022, Wilson announced his immediate retirement from the game.