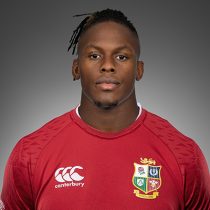 Maro Itoje's rise to the top of the rugby world has been truly meteoric, scooping up many individual accolades whilst contributing hugely at club and international level. Having joined Saracens in 2013, Itoje stormed to the front of the queue in the England u20 reckoning and scored in all of his sides 2014 6 Nations games. This performance earned him England's Man of the Tournament as he went on to captain the side to an IRB Junior World Championship title in beating South Africa.


The lock, who is equally at home on the flank, is one of a number of success stories from the Saracens Academy, stepping up to the first team for his debut in January 2013 in the LV= Cup. Since then he has captained the club to the Anglo-Welsh Cup and developed into a world-class option with astounding physical and defensive attributes.

In early 2015 he was selected for the England Saxons side but was unable to make the senior squad for the RWC following a stellar year at Saracens. Under then-newly appointed England coach, Eddie Jones, Itoje was selected in his first squad announcement ahead of the 2016 Six Nations. He made his England debut as a substitute in the win over Italy in Rome in 2016 and started the remaining three rounds in the second row and was named man of the match against Wales in round 4 of the championship.

Itoje played in three finals with Saracens in 2015, winning them all - added the Premiership and European Champions Cup double in 2016 and was voted as the European Player of the Year as well as the Discovery of the Season honour at the Premiership Awards.

In early April 2016, he signed a new contract with Saracens that allowed him to stay with the team until 2019.

He played every minute of England's triumphant three-test series win in Australia, but a broken hand ruled him out of the autumn internationals. Itoje featured in the 2017 Six Nations as a blindside flanker, showing his versatility as a player. The youngster was named the Saracens Young Player of the Season 2016/17 in May 2017.

The four-time Premiership winner and three-time European champion’s international CV also makes for impressive reading. ‘The Pearl’ guided England U20 to their second-ever World Rugby Championship title before gaining a full cap in the 2016 Six Nations where Eddie Jones’ side was crowned Grand Slam champions.

He followed up with three Test starts on England’s victorious summer tour of Australia and another Six Nations gong before becoming a British & Irish Lion in 2017. In January 2019, Itoje committed his future to Saracens by putting pen to paper on a deal until the summer of 2022.

Firmly cemented as a starter for club and country as well as being widely regarded as a world-class player, Itoje featured in his first World Cup in 2019 helping England reach the Final and took his test cap tally to 34 in the process.

In the 2020 Six Nations, he added 4 more caps to his name before the postponement of the tournament.

In May 2021, Itoje was selected for the 2021 British and Irish Lions, it will be the first time he has toured to South Africa with the side and this will be his second tour overall.

The 46 test cap lock has played the last 6 tests for the Lions and played the most minutes (1136) of any Lions eligible player since the start of 2020.