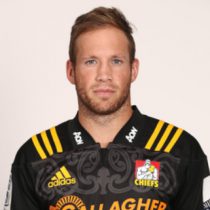 Marty McKenzie can play as either a fullback or flyhalf. He started his career at the Southland Stags in the ITM Cup. In September 2012 it was announced that he would join the Blues for the 2013 Super Rugby season. A member of the New Zealand under 20 side that competed in the 2012 IRB Junior World Championship in South Africa, Marty is the older brother of All Black Damian McKenzie.

McKenzie made his Super Rugby debut with the Blues in 2013 and spent a season with the Chiefs in 2015.

He made his move to the Crusaders in 2016, where he won the competition and also spent time with the New Zealand 7s and has also represented the Moari All Blacks.

McKenzie re-signed with the Crusaders for the 2017 season, he took his cap tally 19 and 42 points as the Canterbury-based side went onto win their 8th Super Rugby Title.

Following his success with the Crusaders he went onto help Taranaki take the Ranfurly Shield off of Canterbury and finish Top the Mitre 10 Cup Premiership table, before getting knocked out in the quarters.

2018 saw McKenzie move to the Chiefs, linking up with his younger brother Damian. He spent two seasons at

After the Mitre 10 Cup Mckenzie was named in the Chiefs 2018 Super Rugby squad and will rejoin his former side and link up with younger brother Damian.

He spent two seasons at the Chiefs making 24 appearances scoring 63 points featuring at flyhalf and fullback.

McKenzie was not signed by any New Zealand Super Rugby sides for the 2020 season and went on to sign a short-term deal with the Ospreys until the end of the 2019/20 season as injury cover.

Now an experienced utility back, McKenzie is incredibly adept in the basics and is accurate from the tee.