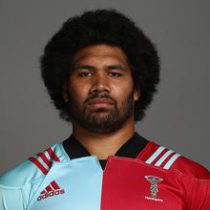 Born in Wellington, New Zealand, Luamanu is a huge abrasive loose forward who made his mark for NZ Schools & U20's, winning the 2008 IRB Junior World Championship in Wales.

Making his provincial debut for Wellington in 2008, Luamanu switched from Wellington to North Harbour for the 2010 ITM Cup, where he was selected for the Blues Super Rugby squad in 2011.

Luamanu played four times but found his route to the first team blocked by All Black Jerome Kaino, then enjoyed another fantastic season of NPC rugby in 2011 for North Harbour.

After a brief stint in Japan at Kyuden Voltex in the Top League, he moved to Europe to play for Benetton Treviso for the 2014-15 in the Pro 12, making 22 appearances.

In July 2015, Luamanu made the switch to Harlequins for the 2015-16 season to play in the Aviva Premiership. Making 13 appearances during his debut season, scoring two tries.