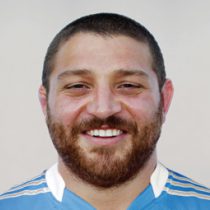 Matías Agüero signed for Italian club Aironi for the 2010/2011 season. He now plays for Zebre as a prop. Agüero was also part of the team that played in the 2007 Rugby World Cup, which he played one game against Portugal . For a year that was his last appearance for the national team before the call of the new Italy coach, Nick Mallett, during the test match autumn of 2008 and, thereafter, the tour summer 2009 in Australasia .After the dissolution of Aironi, Agüero joined the new Italian franchise Zebre. He has been with them since then and in January 2015 he was selected for the Italian 6 Nations squad and made a number of good appearances for the side at that competition. A good end to the 2014/15 saw him selected to represent Italy at the 2015 Rugby World Cup in England.