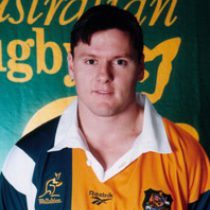 Born in Sydney on the 26th March 1973 Matt Burke was educated at St Joseph's College, Hunters Hill. He showed early sporting ability running the 100 metres in 10.9 seconds and he was a brilliant cricketer.

Burke got his first taste of international rugby when he was included in the Australian Schoolboys team that went unbeaten on their tour of the UK in 1990-91.

On returning from the tour he joined Eastwood Rugby Club and was selected in 1st Grade aged 18 years and commenced his studies in Human Movement at the Australian Catholic University.

Burke was called into the New South Wales senior team in 1993 and he was selected in the 1996 squad that participated in the first Super Rugby competition.

It did not take Burke long to make his name in Australian Rugby as he was called into the Wallaby squad in 1993, his first season of professional rugby, and made his debut against France in Paris.

Burke was one of the greatest Australian fullbacks a superb athlete with devastating pace, bruising defence, a flawless kicking game and safe hands under the high ball. He was a match winner for the Wallabies and Waratahs because of his outstanding goal-kicking record and try scoring ability.

He played an incredible 115 times for the Waratahs, 79 of those in the Super 12 competition.

His eight penalty goals against South Africa in 1999 (World Cup) is an Australian record. In 1999 he was a valuable member of the Australian team that famously won the World Cup beating France 35-12 in the final.

Burke signed a deal with Newcastle Falcons in 2004 at the age of thirty-one. He was granted British Citizenship, therefore his dual citizenship means he was no longer regarded as a foreign player in the English Competition.

He retired from international rugby in Australia 2004 with a massive 81 Tests for Australia, scoring 878 Test points - the second-highest total by an Australian.

Burke represented the Falcons on 59 occasions scoring 288 points, while also captaining the side.

In May 2008 Burke announced his immediate retirement from all forms of rugby after failing to recover from a torn anterior cruciate ligament in his knee suffered the previous October.