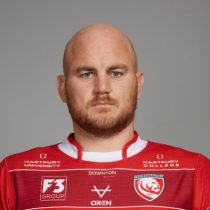 Having graduated from the London Irish Academy in 2009, Matt Garvey went on to become an integral member of the setup at the Madejski Stadium.

The dynamic second row / back row forward also earned representative honours with the England Saxons side. His call up in 2013 came just a year after he underwent a serious neck operation.

Since joining Bath Rugby from London Irish in the 2013/14 season, he has gone on to establish himself as a key figure in the first team squad.

Essex-born Garvey poses a potent threat in all facets of play, and has made a name for himself in the Premiership for his tough tackling and dominance at the breakdown.

In July 2017, Bath announced that Garvey would captain the side during the 2017/18 season. A fracture and dislocation to his ankle in December 2019 and then a calf tear just as he was set to return resulted in 11 months on the sidelines for the talisman and leader.

The experienced forward departed Bath in July 2020 before signing a short-term deal with Gloucester.


After a string of impressive performances, Garvey signed a new Gloucester Rugby until the conclusion of the 2020-21 season. He left the club after just one season with the Cherry & Whites.

In June 2021, Worcester Warriors made the experienced forward their 13th signing for the 2021/22 season.Garvey adds plenty of Premiership experience to Sixways having started his career at London Irish, spent seven years with Bath Rugby and the past season with Gloucester Rugby.