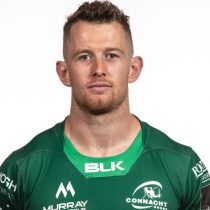 Graduating from Gonzaga College in 2007, Healy played at scrum half in the early stages of his career and represented Ireland U20s in the 2009 Junior World Cup.

After joining Connacht in 2012, he moved out to the wing and broke into the Connacht side in the 2013-14 season, he was also top try scorer for the club and has devolved as an interesting prospect for the future. After a few great seasons and winning the Pro 12 with Connacht, Healy earned an injury call up to the Irish squad for the June test series against South Africa.

Following an early season injury at the start of the 2016/2017, Healy returned to his devastating form after a prolonged spell in the Connacht starting team.

He became Connacht's record try-scorer when he ran in two tries against the Cheetahs in Bloemfontein, bringing his overall total to 44 tries in 104 appearances.

After a total of 55 in 136 appearances across the PRO14 and European competitions, the record try-scorer signed a two-year contract extensions that will keep him at the Sportsground until the end of the 2021/22 season.