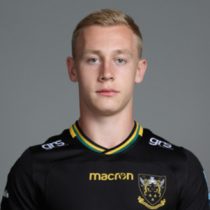 Born in the UK, Worley, who has been playing rugby at Racing 92 for three seasons, made his senior debut for the Top 14 side in a friendly fixture earlier in 2018.

The young back moved to Hong Kong at 5-years-old where he represented them at Under-16s, Under-18s and Under-20s at scrum-half; Worley transitioned into fullback on arrival in France and went on to win the Under-23s French league with Racing’s Espoirs in 2015.

In May 2018, Worley signed a deal with Northampton Saints.