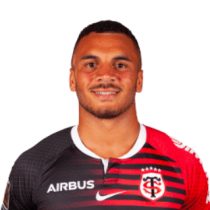 Lebel joined the Toulouse's Training Center in 2014 where he spent 6 seasons.

Thanks to his qualities of speed and his ability to burst through defence, he joined the France U20s in 2018.

Lebel has become an integral part of the Toulouse squad and will undoubtedly show his great potential again in the 2020 season.

His potential didn't go unrecognized as he was called into the France test side in November 2020.